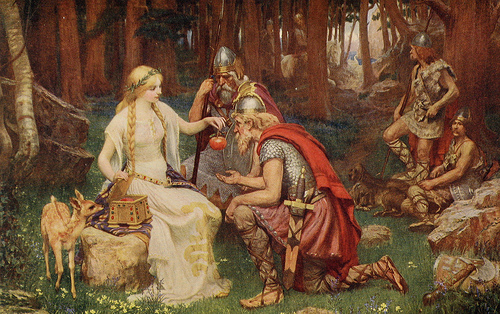 In Teutonic folklore, Iðunn was the keeper of the ‘apples of immortality’ for the aging Aesir and Vanir gods which kept them young for a very long time. The ‘fruit-bearing tree’ referred to by Tacitus in his description of Norse runic divination may have been the apple. The apple indicate choice, and was used in love spells and healing magic. Some folklorists claim she is an Aesir goddess, others claim she is a Vanir goddess of youth , immortality, and fertility much like Freyja. Idunn’s apples of immortality are golden and magickal and the Vanir gods teach magick to the Aesir gods. ie. Freyja taught Odin magick.

Apples are also used in Mabon a Celtic festival celebrating the second harvest during the Autumn Equinox on or near September 22nd. You can read more about this on my blog called Mabon.

When one slices an apple in half it displays a star.

In Norse mythology, Iðunn is described as providing the gods apples that grant them eternal youthfulness.
A number of theories surround Iðunn, including potential links to fertility, and her potential origin in Proto-Indo-European religion.

The name Iðunn has been variously explained as meaning “ever young”, “rejuvenator”, or “the rejuvenating one”. As the modern English alphabet lacks the eth (ð) character, Iðunn is sometimes anglicized as Idun, Idunn or Ithun.

19th-century scholar Jacob Grimm proposed a potential etymological connection to the idisi. Grimm states that “with the original form idis the goddess Idunn may possibly be connected. Grimm further states, that Iðunn may have been known with another name, and that “Iðunn would seem by Saem to be an Elvish word, but we do not hear of any other name for the goddess.

The thirteenth century Prose Edda, cites that Loki was once coerced by the jötunn Þjazi or Thiazi to lure Iðunn out of Asgard and into a wood, promising her interesting apples. Þjazi, transforms into an eagle, plucks Iðunn from the wood and takes her to his home. Iðunn’s absence causes the gods to grow old and gray, and they realize that Loki is responsible for her disappearance. Loki promises to return her and, in the form of a falcon, finds her alone at Þjazi’s home. He turns her into a nut and takes her back to Asgard. After Þjazi finds that Iðunn is gone, he turns into an eagle and furiously chases after Loki. The gods build a pyre in Asgard and, after a sudden stop by Loki, Þjazi’s feathers catch fire, he falls, and the gods kill him.