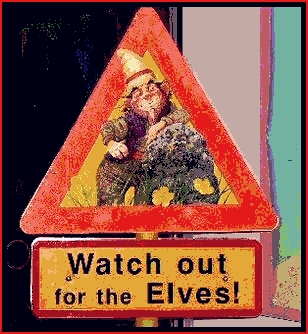 A very unusual story  was revealed in the Icelandic newspaper, called Fréttablaðið. Meaning in English,  frétt (“news”) +‎ blað (“paper”) concerning some lava stone that a British tourist returned home with him a few years ago. According to the story he experienced real bad luck in his personal and public life when returning to the UK. He blames the Icelandic lava stone, and actually mailed it back to Iceland, pleading that it be returned to its natural habitat.

Tourists sometimes need to be reminded that it is illegal to remove stones and rocks from Iceland. This law originates from the tales of the Huldufólk, Icelandic elves that mine the earth. The icelandic folk believe that these busy elves are the guardians of the earth, rocks and stones. Their message is clear, Don’t touch our rocks or bad luck will follow!  Check out the original story here   Told Lava Mound Source of Misfortune

The Huldufólk of Iceland are small elf like creatures that hide under hill, rocks and trees.
They are known to cause chaos when their natural environment is threatened by today’s technology. ie. People using graters to flatten their hills. Icelandic folk have created small houses built into rocks and hills for them.

The folklore behind them has been Christianized. The tale cites the Huldufólk are the unwashed children of Adam and Eve. They were bathing their children when the Abrahamic god showed up uninvited. The Pagan view is that the Huldufólk are the guardians of the earth, they aid mother earth to stay unblemished and majestic.

Adam and Eve, quickly hid the gritty children behind rocks and trees and eventually forgot about them altogether, leaving them to fend for themselves. They had fibbed to their Biblical god when he asked about all their children. So the Biblical god cursed their unwashed children leaving them to stay hidden forever. The Huldufólk blended with the land and never really aged due to their small size and the curse laid upon them by a tyrannical god.

*Alda Sigmundsdóttir (19 April 2009). “My Iceland: the glamorous opulence of the hidden people”. The Iceland Weather Report.